For three decades, Prof. Castoldi’s school has been widely recognized as one of the top self defense schools within the national Jujitsu organization, Jujitsu America. The school has turned out many of the country’s top Jujitsu technicians, several of whom now run the most highly regarded Jujitsu clubs in the nation. Professor Castoldi is an instructor to numerous law enforcement and correctional officers including local and state police, FBI, U.S. Marshall Service, U.S. Secret Service and the military police.
10th degree Grand Master of Castoldi’s Street Self Defense – Awarded by Prof. Wally Jay, Prof. Willy Cahill, and Prof. Joe Souza
8th degree black belt – Jujitsu America – Awarded by Prof. Wally Jay, Prof. Willy Cahill, and Prof. Joe Souza
7th degree black belt – Small Circle Jujitsu – Awarded by Prof. Wally Jay
6th degree black belt – Jujitsu – Awarded by O-Sensei Phil Porter
5th degree black belt – Judo – Awarded by O-Sensei Phil Porter
2nd degree black belt – Karate & Kung Fu – Awarded by Master Winchell Woo
Regional Director – Jujitsu America for the Northeast US, Florida, and the Gulf Coast
1964 – Began training with his father, Al Castoldi, the first American to bring Jujitsu to the New England area (circa 1945).
1974 – Founded the West Suburban YMCA Jujitsu School
1978 – Formed association with Professor Wally Jay 10th dan and founder of Small Circle Jujitsu. He began study and instruction of Small Circle Jujitsu theory, integrating its painful effectiveness into his own unique system of practical, no-nonsense street self defense.
1983 – Jujitsu America Instructor of the Year
1988 – Inducted into the Jujitsu America Black Belt Hall of Fame
1991 – Inducted into the World Martial Arts Hall of Fame
1991 – Awarded Jujitsu America’s Outstanding Ambassador Award
1991 – Inducted into the Zen Do Kai Hall of Fame
1998 – Inducted by Shihan Rocky DiRico into the International Black Belt Hall of Fame
1998 – Awarded Professorship by Jujitsu America
1998 – Recipient of the flag flown over the Capitol in honor of Jujitsu America
2002 – Awarded Jujitsu America’s Wally Jay Award
2004 – Awarded Jujitsu America’s Spirit of Kodenkan Memorial Award in memory of Professor John Chow Hoon
2005 – Awarded Jujitsu America’s Distinguished Service Presidential Award
2005 – Inducted into the WWKO (World Wide Karate Organization) Hall of Fame
Prof. Castoldi is a real survival story. At a young age he suffered from Polio and doctors told him if he survived he may not be able to move around properly. He began his martial arts training when his sister dragged him into the YMCA and introduced him to weight lifting and a Karate class. Prof. Castoldi slowly began understanding the martial arts system and began training in karate and kung fu simultaneously. He overcame the Polio epidemic with no problems to his movement and soon enough he was training in seven different styles of martial arts all at the same time. He would go from class to class and have each of his teachers yell at him because one of the styles he was taking would be the complete opposite of what he was learning in their class. One style said be fluid and loose while the other style said be firm and rigid.
In 1978 the 6’4” 225 lbs Dave Castoldi was introduced to the 5’3” 110 lbs Prof. Wally Jay who needless to say, manhandled Dave Castoldi. It was here Castoldi began training with Prof. Jay and integrated everything he had known into what is now Castoldi’s Street Self Defense System. The key to this system is practicality. drawing heavily upon the principles of Professor Wally Jays Small Circle Jujitsu.
Castoldi’s style works for everyone: men, women, and children. Women have found great confidence in learning the style because it teaches them self protection from all situations, including rape attacks, multiple attackers, and weapons defense.
Castoldi is world renowned for his weapon defense techniques because he has introduced weapon disarmament and developed it throughly. 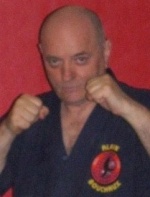 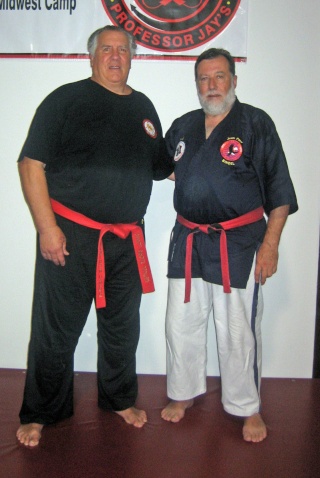